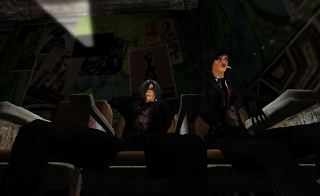 The film started. A lot of zombies dragging axes through the streets looking for blood, roaming narrow squares and dark alleys. Unexpectedly, in the middle of the film, a kid becomes the center of the plot. He has this strange gift. He is a Pigmenter. He touches people and they turn blue, green, red. Much to the zombies’ puzzlement, he would not run away from them. He would actually run towards them. He would then touch them and turn them… yellow, of all colors. It was pretty obvious that the zombies didn’t like their reputation ruined like that. Why not red? Why yellow? That was a terrible color with all sorts of derogatory innuendos. So, after much discussion among the zombies, a decision was made. They would run away from the Pigmenter instead of after him. And that was a terrible turning point in the history of the zombies. They would certainly have to fight hard to regain their reputation. But that would be for the sequel!
Writer's Dash
Posted by Lizzie Gudkov