A Letter on Believing

“Sometimes, there are things in life that make us struggle, that turn each day into an uphill battle.
Then, sometimes, someone shows up and asks “are you okay?”
Sometimes, a question as simple as this is all it takes. The world seems to change, to shift just a tiny bit. Sometimes, that is the difference between struggling to stay afloat and moving on.
I don’t really have to tell you that I’m not ok. You know.
And you encourage me, you encourage me to believe.
Believing that life can be ok again is a good start, isn’t it?
Thank you.”
100 Word Stories (Prompt: New Year's Resolutions)
Posted by Lizzie Gudkov No comments:

He dropped the letter in the mailbox and glanced one last time at her window.
It had taken him several days to write that letter, many hours of writing and rewriting. And so many sleepless nights that he had lost count.
As he walked away from his life, he wondered if she would notice the tears on it.

When she opened the envelope, she saw a piece of paper inside with nothing written on it. She turned it over a few times and shrugged. She was going to throw it in the garbage, but instead gave it to the cat.
100 Word Stories
Posted by Lizzie Gudkov No comments:

It was impossible not to notice the stench.
Postal Inspection officers opened the parcel. Dogs were called in to sniff the box for drugs and human remains. They found nothing.
The parcel was sent on its way.
The next day, the news reported the mysterious death of an elderly couple, after the mail was delivered to them.
No one mentioned the man with a grudge against the Postal Inspection Services, grumbling in his living-room.
Opening the box should have triggered an immediate lethal chemical reaction. Okay, it was a really bad idea to send the damn parcel to his parents…
100 Word Stories
Posted by Lizzie Gudkov 2 comments:

Pick a card… any card!


The seer spread the cards on the table.
“Pick a card… any card.”
The one Sophie picked said “Wind, Doll, Disgust”.
“Which deck is this?” asked Sophie.
“My own… You’ll die.”
Sophie was horrified. She had been told that seers never announced someone’s death like that.
“Stabbed.”
“What does that have to do with wind, doll and…?”
“Nothing.”
Annoyed, Sophie left.
A gust of wind dragged a naked, headless doll to Sophie’s feet; it was covered in blood. She stopped to kick it out of her way and… a piano fell on her head.
Yep, the seer was still learning.
100 Word Stories
Posted by Lizzie Gudkov 2 comments: 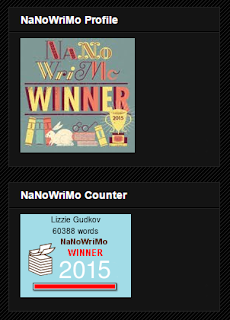 Another November, another NaNoWriMo. It's now time to take stock of the process and the results.

When I closed last year's NaNoWriMo chapter, I wasn't sure I'd go for the 50k again. As a matter of fact, I was almost certain I would not try it again. I used a speech recognition program for the first time and that changed my writing - the sentence patterns, the type of words I'd use and the general flow of the text. I felt that it had become flatter, less interesting. I liked the story very much (I still do) - a thriller/mystery whose main character is one of the goofiest characters I've ever created - but the writing seemed to take an eternity.

However, I decided to follow my gut-instinct and, for the third consecutive time, dive into the NaNoWriMo madness.

These three years were a valuable learning path and, despite the hardships, I wouldn't change a thing because it feels like I'm treading a path resembling a spiral, getting closer and closer to that one moment when I'll say "this is it" - I have finally found my "voice".

Some people say I'm a gardener - I'm neither a plotter nor a pantser. I prefer to know where to begin and where to end. The middle does get a bit fuzzy at times.

I started working on this year's story more than a month ahead of time. I used a word-processing program and outliner for writers. That helped structuring the story in more detail.  For the first time, I took quite some time to create character profiles and location notes. I think they helped bring the characters/locations to life in a more credible way.

Each year, I add something to the writing process. The first year, I took a few notes on a piece of paper not bigger than a napkin (and I busted my wrists writing furiously too). The second year, I used a speech recognition program and jotted a few ideas down for each chapter of the story and on what I'd write each day. This year, I used the word-processing-program and outliner to have a complete chapter/scenes structure and character/location notes.

Do you see it? There's a pattern emerging here. I'm plotting and preparing a lot more now than at the beginning.

The biggest lesson I've learned this year was that I have to be more patient. The story needs to mature which means I have to start working on it a lot sooner than October. I have to live with my characters a lot longer than I have till now, before I release them in a story to go about their usual mischievous ways.

NaNoWriMo is not a moment to write a book - as I imagine it is for so many writers. For me, it's a month of testing myself, pushing myself to the limit to see where the weak spots are, to learn and to grow.

I'm happy to say that I keep learning and hopefully growing too, and that is something I value immensely. 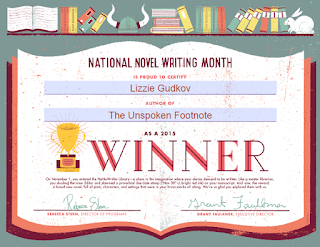 A final word. Thank you to my family and friends who, both in Real Life (RL) and in Second Life, were supportive of my writing and patient enough to put up with the odd schedules.

And a very special thank you to my writing group. We have met every single morning of every single day of November (sometimes still half asleep and struggling desperately to stay awake!), some doing the NaNo, others writing RL short-fiction/novels/work stuff, and we pushed one another to go beyond what we thought we would manage and to go beyond what life threw at us when we least expected it. You guys are awesome and I would never have made it without you. You guys know who you are. Thank you.