When he entered the room, a spike through his chest, everyone thought he was joking.
When he collapsed in agony, everyone thought his acting was brilliant.
When a puddle of blood appeared, everyone said “He’s awesome with special effects.”
When he begged for help, the room was ecstatic. “That’s why he’s the best,” some shouted.
When he didn’t move anymore, a speck of doubt crossed their minds. It only lasted a few seconds.
When everyone left, the police received an anonymous call.
There was a dead body on the floor alright. No spike though. It would be a long night.
100 Word Stories
Posted by Lizzie Gudkov No comments:

I must admit I’m not sure I’m the right person to write this month’s column. I have never written children’s stories and I know them only as a reader. Yet, being absolutely mesmerized by this gem, I couldn’t resist. The fact that Lauren has done an impressive job will definitely make my task easier.

Upon arrival, the visitor is greeted by two friendly bunnies. Now, which way should we go? The warm welcome makes it difficult to decide. Ok, southbound.

Note: One of the characteristics of Second Life is the fact that it's constantly and rapidly changing. Sims come and go; others look quite different, as time goes by. Do take that into consideration when using the links provided.
Posted by Lizzie Gudkov No comments:

John’s only grandniece had six children. At family gatherings, John was always somewhere else with his old buddies, a tropical island, a cruise, a religious peregrination. He wasn’t religious, but any excuse worked. This time, his coward friends decided to visit their families. So, when a choir of kids asked John why he looked all wrinkled, he showed them his gold teeth. “See this? You won’t get any. You’re out of the will.” Little did the family know that he had already spent all his money and that he had no intention of parting from his teeth, even after dying.
100 Word Stories
Posted by Lizzie Gudkov 1 comment:

“Mary and Patrick named their daughter Joan. Joan married Anthony and had a baby girl they named Andrea. Andrea partnered Rosie and adopted baby Mary. Mary married Patrick; they had a daughter they named Joan. Joan got married to Anthony and had a baby girl…”
“Wait a second. There’s something wrong with this. Genealogy doesn’t go in circles. If you tell me their baby was called Andrea…”
“No. She was called Hopeless.”
“What a cruel name to give to a child!”
“Not at all. They were… hoping for… less… of a circular family history. Get it?”
“Jeez. What a dumbass.”
100 Word Stories (Prompt: Hopeless)
Posted by Lizzie Gudkov 2 comments:

I am not a Second Life blogger, nor do I intend to be.
This post is the result of my observations and opinions.

A few years ago, when Linden Lab decided to drop the organization of Second Life (SL) Birthdays (SLBs), like many others, I felt the responsibility to do something about it. And I did. I (along with London Junkers, my SL accomplice) took part that year.

I had a strong admiration for the herculean effort of both organizers and volunteers who stepped up and took matters in their (our!) own hands. The SLB celebrations didn’t die. As a matter of fact, it seemed that there was a renewed sense of enthusiasm.

Well, things happened and I was faced with a few issues I shared with the organizers back then. Then, I saw those I respected leave the organization team, for whichever reason (I’m not implying anything one way or the other) and I never applied again. Nevertheless, I continued to visit the sims, even if only teleporting in to see specific areas.

This year, I decided to visit every single exhibit in the SL12B.

When It Comes to the Crunch

I love hunts, so I thought a good way to start would be to do the SL12B hunt. It’s a good idea to host a hunt and I believe it’s not the first time one happens on SLBs grounds. So, I was hopeful to find something interesting.

Problem 1: The maps. I’m bad with maps and that’s why I delegated the task of navigating through the different parcels to London. However, even I realized that the option of placing a star on top of each parcel offering a gift was a tricky one, not to mention the rather chaotic placement of the sims’ names on each bit of the map.

Problem 2: Identifying the gifts. Some were designated SL12B[something]. Others had been completely renamed. Some were inside folders. Others went to the Objects system file. Suggestion – name the gifts according to the sim where they are located, for instance SL12B Sp[ectacular] #1. It would be easier to know whether we had missed a gift. It would be easier to organize them in our inventories.

Problem 3: The prizes. I am not the ungrateful type. I believe that when someone offers a gift, he/she does it from the heart and that we should receive it candidly and be thankful. Some exhibitors are amazing creators and are able to offer extraordinary prizes. Others must rely on someone else’s skill or their own. And that’s fine. Having said that, the SLB is a window into what SL has to offer. Special attention should be placed on what people take home with them from their visit to an SLB.

The impression I got when I arrived at the SL12B for the first time (remember, I was doing the hunt) was that it was a sandbox.

A certain visual cacophony is inevitable, especially with small parcels in such close proximity. Yet, some of the exhibits looked incomplete. Others were simply too ugly to look at, I’m sorry to say. But even the ugly ones belong in an event like the SL12B. “Ugly” is a debatable concept and besides not everyone is a building master. I get that.

Problem 1: Product displays. I grabbed a few landmarks along the way and teleported to the creators’ stores only to see the exact same items there. I understand that the theme “What Dreams May Come” was general enough to accommodate practically anything, but if I wanted to see a store display I’d go to a store. I am not against people using their creations. However, I’m strongly against people using their creations without making an effort to present their interpretation of the theme.

Problem 2: Recycled exhibitions. Some of the exhibitions were previously featured at other events. One thing is to have a specific, very identifiable style. And many in SL do. Another is to show the same over and over again.

Problem 3: Cliché-ridden exhibitions. Not everyone is a creative genius. Not everyone is skilled enough to present something unusual and clever. Beds, pillows, sheep and other sleep related options are always dangerous. Unless you have an original way of working with those elements (and a few did), you’re stuck. The line between being utterly ridiculous and totally ingenious is a fine line to tread.

Problem 4: Lag. Unavoidable? Yes. It’s SL. There’s lag. Period. Could we reduce it? Yes. Was that done? No. What I saw was tons of people walking around with impossibly high ARCs. I found that disrespectful towards other visitors, but… what the heck… what’s really important is to look good, right? I walked like a duck, removed all my attachments and wore an invisibility layer. That lowered my ARC to green and I managed to survive.

Problem 5: The exhibits looked amazing in the photos! I hate being unfair. Since my first impression of the exhibits was so poor, I started checking blogs and other social media channels. The photos published there were amazing. When I teleported to the exhibition itself, things often looked different. This is the problem of changing the Windlights to get a nice shot. I have nothing against nice shots, quite the contrary. But… well. I figured I wasn’t being unfair after all.

Applying to take part in a celebration of SL carries within itself a lot of responsibility. You’re expected to show your best. I’m not sure everyone understood this.

I visited the SL12B sims throughout several days. I only encountered two volunteers in the welcome area. They were very nice, very polite and welcoming. They offered assistance and encouraged me to visit all the exhibitions. Good job!

Q1: Why did some exhibitors have parcels twice as big?
Q2: Why did members of the organization also have parcels? Considering that there’s a selection process, this seemed slightly… awkward.
Q3: Who paid for the sims? Perhaps the answer to this question would provide some clarification to questions 1 and 2? If yes, I withdraw the comment I added to Q2.
Q4: Were the exhibitions reviewed after they were set up in order to verify if they complied with the Exhibitor Policies?
Q5: Was the hunt trail tested in order to create a cohesive event? 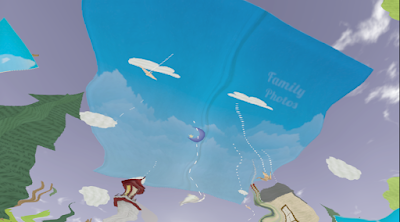 Those who put effort, commitment, time and most likely money into this community celebration are to be complimented.

To all who didn’t recycle exhibitions, who didn’t set up shop, hoping to draw people to their stores, to those who created something new especially for this event, I congratulate you. You deserve my respect. And believe me, I appreciate and value your work.

See you next year at the SL13B.
Posted by Lizzie Gudkov 2 comments:

Singing and dancing in the rain was not his thing. However, he was tempted to do it anyway just to ruin his damn shoes, a birthday gift from his girlfriend. Anticipating something as catastrophic as a pair of bright orange shoes, he had told her not to get him anything. She insisted and the result was… catastrophic. When the weather got worse, all he could think of was singing and dancing in the rain. When he returned home with ruined shoes and a well-rehearsed guilty look, she broke up with him. Hah! She knew him all too well, didn’t she?
100 Word Stories
Posted by Lizzie Gudkov 2 comments: