Camp NaNoWriMo started in 2011. It took place in July and August. In 2012, it moved to June and August to finally settle for April and July since 2013.

2013 was the year I started taking part in the NaNoWriMo, actually. I had heard about Camp, but the hubbahubba was far less intense, so I never really considered taking up the challenge.

However, as it always happens when you belong to a community of writers, I heard about others' experiences and was rather curious to check deeper into the possible advantages of Camp NaNoWriMo.


An interesting feature it offers is the fact that we belong to a cabin. A cabin is composed of 11 writers and the communication channel allows for a much closer support than what we have with the general list of contacts at the NaNoWriMo.

I'm happy to say that, for the first time, The Virtual Writers community has its own cabin at the Camp NaNoWriMo website and I'm thrilled to have been invited to join it.

Plus, there is an added element of fun in this endeavor. Milk Wood has a real camp. Well, virtually real! I'll refrain from explaining too much because Katjamez has done it already and much better than I would. So, for a comprehensive look into Milk Wood's virtual camp site, do check KatJamez's wonderful blog post here.

Tip: Check the rest of the blog too! In her blog Mirror Rim, Seeking the Muse, Kat wrote a series of posts titled Camp Survival Kit that I find particularly insightful.

Another engaging feature of Camp NaNoWriMo is the fact that we can not only establish our own goals but also choose the type of project we would like to work on, meaning, the challenge is not confined to the limits of fiction/non-fiction writing. As a matter of fact, many participants revise/edit or take on non-noveling projects such as writing scripts.

Tip: To determine how to establish word count for editing/research and scrips/graphic novels, click here. For the FAQs, click here. 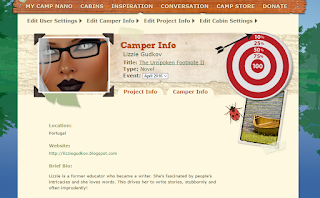 Adjusting The Needs to the Challenge


The whole idea of the NaNoWriMo challenge is to push people to write, to encourage them to be productive in whichever project they might embrace.

Having accomplished the 50.000-word mark last November (and having surpassed it largely by almost 10.000 words) I didn't, however, manage to finish the novel. The Unspoken Footnote became a far lengthier text than I had first anticipated.

Long story short, it's time to finally tackle the last few chapters (seven) and finish the darn thing! I have established a goal of 10.000 words, 334 word per day.

Considering that I host the morning Snatches at Milk Wood, and that each session lasts 30 minutes having a goal of 500 words, I think this is totally doable. As a matter of fact, I do think I'll write more than the 10K, but I prefer to be conservative and reach the goal. Real Life does tend to throw a few unexpected obstacles my way every now and then.

Tip: The 500 Word Snatches I host take place Mon-Fri at 2am SLT (10am PRT/UK) and Sat 12noon SLT (8pm PRT/UK). On week days, we have two 30-minute sessions and on Saturdays we have one. For more information on other schedules, click here.

“Where are we?” asked Penny.
The small boat slid through the narrow strips of water.
“I thought…”
“I know, love,” replied Miles.
Unexpectedly, a bend in the canal revealed a boathouse called Singapore. It was deserted.
“Ok. This is unacceptable,” Penny shouted. “Not only do we not travel to Singapore but we have to wait?! We are professionals!”
Suddenly, a sharp sting hit the side of her head. She was gone immediately.
The boat driver then turned his attention to Miles.
“The invitation did say Singapore, last stop.”
Miles tried to go for his gun, but it was too late.
100 Word Stories (Prompt: Singapore)
Posted by Lizzie Gudkov No comments:


The kids made fun of Bernie whenever he said “I’m a King.”
What he meant was he belonged to the old local King family, although he wasn't called “King”.
Bernie was, however, proud of his heritage and no one would convince him otherwise.
Fresh out of College, a distant cousin called Harold King introduced him to the right people.
When Bernie came back for his high-school reunion, the kids sure didn't make fun of him when he said “I’m a king!”
He had married into a European royal family and had become king, only in title, but still a king.
100 Word Stories
Posted by Lizzie Gudkov 2 comments:

“We better throw it in the garbage,” complained Tim infuriated.
“I’ll fix it,” said Paul.
“We've been here for ages, Paul.”
Paul rolled his eyes and continued to work.
“Forget about it, I tell you.”
“I will fix it.”
This continued for a few hours, Paul getting more and more aggravated.
Suddenly, the thing started purring.
“See,” said Paul triumphantly.
“But it’s making an odd noise...”
Paul closed his eyes for a second, gave the thing a swift jerk and swung it at Tim.
What a shame, he hadn't followed Tim’s words and thrown the damn saw in the garbage.
100 Word Stories
Posted by Lizzie Gudkov No comments:

Silver with a red stone, thought Marcus. She liked red.
The shopkeeper was extremely friendly, however none of the rings appealed to Marcus. He wanted something different.
“Well,” said the man. “I have one here that is very special. It’ll make her young and beautiful forever. But it comes with a special price too.”
“What’s the price? I’ll pay.”
When he left the store, five of his fingers and an ear were gone.
He should’ve noticed those small jars on the shelf behind the counter. It turned out the man was a collector of body art, as he put it.
100 Word Stories
Posted by Lizzie Gudkov 2 comments: