“The value of being a loner is difficult to explain, they tell me.”
The conversation went from bra sizes to philosophical states of mind in a heartbeat.
“In this job, we can’t be loners.”
The girls nodded. One sat in the back.
“Teamwork.”
More nodding.
“We have to stick together.”
Emphatic nodding.
Later that day, all dressed up for the graduation gala, each went about their lives, enjoying the moment.
They didn't notice she was outside, watching the fiery sunset. That would be the first of many fiery sunsets she’d go through alone.
The Squad made her an undercover agent.
100 Word Stories
(PICK TWO: Squad, Value, Callous, Iron, Bunk, Loner, Wispy, Divert)
Posted by Lizzie Gudkov No comments: 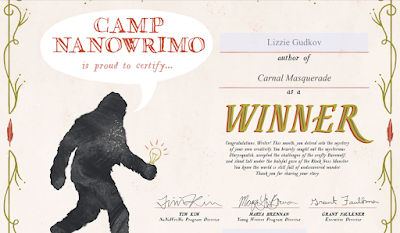 The goal was to write 10k. That goal was reached well ahead of time. I knew life would take over eventually, as it ended up happening. Writing as much as possibe in the first two weeks proved to be a smart strategy. I did manage to add 3k+ to the 10k mark.

For the first time in several editions of Camp NaNoWriMo, I ended up being added to a group called Oakwood Palace that had nothing to do with my usual writing community. It was a quiet group, as these tend to be, with a handful of enthusiastic members.

I suppose the lesson learned here is, create your own cabin.

And onwards to November. I just might be a rebel this year.

Posted by Lizzie Gudkov No comments:


Warning: A bit of a rant follows. If you're not into rants, feel free to skip it.


I don't hate anyone.
I was taught that hating someone is not a very Christian thing to do. I don't know much about all that Christian stuff, but I was a kid. I took their word for it.
However, some people made it to a special list.
It's called “I'll never forget”.
The co-worker who, at a staff meeting, said “it's not our fault you have that thing” while deciding I would teach the largest and most difficult groups of kids the following school year. That thing is a chronic illness called Myasthenia Gravis, something that limits my life every single minute of the day. I was well-considered by my peers and I worked the hardest. My reply was “I wish no one, of those you love the most, ever has this thing”. She started crying. To this day, I don't know why. If anyone should've cried, it should've been me. I was forced to retire that year.
The friend who called me selfish because I wouldn't pick up the phone while I was in hospital undergoing a treatment for that thing. I lost a friend.
The woman who came between me and someone I cared for very much. Looking back, she only did what she was allowed to do. And I didn't do any allowing... She is one of the most insecure people I have ever seen. Her profile updates are textbook examples of a terribly lonely heart. It's actually sad to see. She was an eye-opener.
Finally, someone who said the most unthinkable, harmful things about me. It was a terrible, painful blow.
And every now and then these people come to mind.
I haven't seen them in a long time.
I wonder if they are better off now.
I wonder how their lives have moved on.
I still don't hate them.
Because of what they did and said, better things happened.
I stopped working, and my health improved exponentially.
I left behind a friendship that was destroying me.
I got to see a few things I had been blind to.
I met someone who makes my life sunnier.
Years will go by, but I shall never forget what you did to me and, from the bottom of my heart, I thank you for that.

Note: "Myasthenia gravis (..) is a chronic autoimmune neuromuscular disorder that is characterized by fluctuating weakness of the voluntary muscle groups." Source: Myasthenia Gravis Foundation of America

Email ThisBlogThis!Share to TwitterShare to FacebookShare to Pinterest
Tags Bits and Pieces

She just waited there, wearing this huge hat while sitting between the oversized figures of Death and a Bride.
The display was a performance, they said. All she had to do was sit down and be quiet. And that’s what she did. Well, at least until Death started coughing.
She stood up and peeked in through the eyes of Death, wondering if anyone was inside.
“Are you ok?”
To which Death replied, amidst intense coughing, “Help me.”
Everyone fled. Too creepy, the critics wrote.
Apparently, Death had planned to rob the jewelry-clad celebrities attending the opening, and Death almost died.
100 Word Stories
Posted by Lizzie Gudkov No comments:

He flattened the map on the table.
“This is where we are going.” And he thumped his index finger on the right spot a few times for emphasis.
The gang seemed bored.
“Get in the cars and… try to look inconspicuous so the police don’t stop you, ok?!”
They all nodded.
When he arrived, he saw no one.
“Damn retards… They got caught. When you want something done, do it yourself.”
He walked inside the bank. Empty.
He got caught too.
“One-way ticket to hell,” one of them had the gall to tell him when they met again in jail.
100 Word Stories
Posted by Lizzie Gudkov No comments: