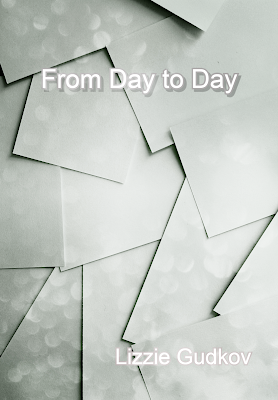 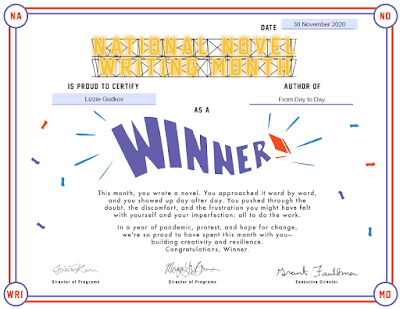 Posted by Lizzie Gudkov No comments:

Throw it in the bin and forget about it.
But this area is a cluster of infected cases.
Throw it in the bin and forget it.
Walking away is not an easy task when your conscience nags you.
He had to go back. He grabbed the bin, dragged it away to the dump area and chuck it into the fire.
The bin was closed the whole time. He made sure of it.
When he got ill, he was tossed in that same neighborhood, forgotten.
The others, they kept throwing infected stuff in the bin, carelessly, just like they did before.
100 Word Stories
Posted by Lizzie Gudkov No comments:

Grasp a line of thought. Or try to.
And those animal heads mounted on the wall. The moody embalmed fish that was supposed to look alive and looked even deader. All conspiring to kill.
The door swung open and there it was. They dumped it on the table.
To work.
The chainsaw slashed through the skin, the meat, the bones. Cracking sounds signing the final surrender.
A leg, another leg. An arm, another arm.
The head... Oh, the head... That grimace of anger.
Good thing they didn't have to mount her head on the wall. The fish wouldn't like it.
100 Word Stories
Posted by Lizzie Gudkov No comments:

The herb expert always had a suggestion and a word of advice.
“And to lose weight?"
Herbs. He took them all.
And then the cramps, the headache, the nausea, the vomiting.
He went to hospital.
"What did you take?"
“This and that,” he replied uneasy, “this and that.”
When he got home, he took some more. He wanted to be elegant and fit into those tight jeans he bought by mistake.
More cramps, more headaches. The nausea, oh, the nausea.
Herbs for this, herbs for that. Enough.
"Fuck the jeans," he cried out loud. "Fuck the expert. I like plump!"
100 Word Stories
Posted by Lizzie Gudkov No comments:

A giant creature moved forward sluggishly, its head bowed down.
They knew it was coming. They thought they had enough time to prepare themselves.
They drafted a plan. They created the trap.
They didn't monitor its growth. It's OK, some said, it'll be fine.
When they saw it, they knew they were in trouble.
Who'll be the sacrificial hero? Who? No one wanted to be a hero.
Arguments, fighting. Some died. Let's feed those to the beast. No, no respect for the dead.
Some were imprisoned.
Yes, let the revolution begin now... before everyone gets killed, one way or another.
100 Word Stories
Posted by Lizzie Gudkov No comments:

The Faint Sound of a Piano

The faint sound of a piano reminded her that she had to change...
From her tower of self-righteousness, she knew everything better than anyone. But she felt hopeless. She couldn't reach out. Pack up your past and put it away now, she thought. This is not what you want. You want to be happy. But she couldn't. She just couldn't. It was far too late. She had to put up that front. She knew better, she was smarter, she just was.
The faint sound of a piano made her cry. She was so lonely and it was everyone else's fault.
100 Word Stories
Posted by Lizzie Gudkov No comments: