A Story Waiting To Happen...

This post is part of a series of monthly articles  for the Virtual Writers Inc. website about sims in Second Life that could be inspiring for writers. My goal is to trigger ideas for new stories, new characters and new settings.

Note: One of the characteristics of Second Life is the fact that it's constantly and rapidly changing. Sims come and go; others look quite different, as time goes by. Do take that into consideration when using the links provided.

“Annwn Willows is about a story still asleep”, writes Joanna Corith as she introduces her sim. How could I not write about it, with such an introduction? How could we not drop by for a visit? After all, we are writers incessantly looking for stories.

I decide to follow Joanna’s suggestion and open my browser. With Ólafur Arnalds’s breathtaking song Ljósið playing in the background, I sit on a bench in the island where visitors land upon their arrival, and watch. Night time is slowly fading away and the sun is coming up. Everything looks mysteriously beautiful. Annwn Willows makes me think of being born, of growing up, and getting old.

Four islands populate the four corners of this water sim. We shall visit all, tracing a fine balance between Time and Life. I invite you to join me for a tour of this wonderful world of stories and dreams.

From where I sit, having as a confidant the sweetest looking squirrel, I face an island across the water. I wonder how I could get there. I grab a bird and fly over (spread across the sim, there are a few stars and other objects you can click to get a ride). 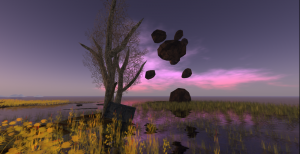 The first island I take you to beams with yellow grass that clears, here and there, giving room to a few sit-down areas around a ruined ice-cream van. A rotating chair by the line of lights draws my eye to a cup resting on the table, promising the outbreak of spring. A “Welcome” banner invites me to check the van, while a deer grazes placidly behind it. This makes me think that a group of teenage friends could meet here and, with the excuse of having a few ice-creams, hang out throughout the afternoon, delaying the inevitable moment of returning home.

Despite the visible decay, there’s a sense of magic as I approach a table where a few candles burn inside clear glass bottles. Underneath the glowing bottles, a newspaper announces both worrisome and interesting news. On this island sheltered from the world, the deer grazes on by the edge of the waterline, oblivious of everything.

As I walk farther away from the van, I see an old piece of wood floating about and a door on the ground, lying on its side. A fragile line is holding it sideways, which is something quite impossible to comprehend.

Above the water, a meteors shower is falling. Or is it being pulled back into outer space by an unexplainably powerful force? The pallet raft and the two floaters make me think that there will be a positive outcome though, come what may. 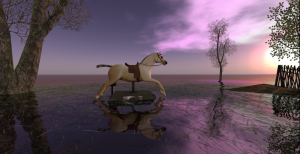 I grab a raft and head west toward an island covered in blue grass. There, a piano whispers a song played by two, a symbol of Life moving onwards and shared with someone special. The bike, the hammock and the table with the tea set, are also made for two.

Farther into the island, a secluded spot in the middle of a dense wooded area, much like a playground, is covered by water. Two small toy boats and a toy raft roam around peacefully while yellow particles (are they glow-worms?) seem to be as playful as the small boats. I look up. A meteors shower makes its appearance here as well, a symbol of Life’s troubles to be overcome. As I look to my left, I see a horse. It seems to be a carrousel horse, unpaired from its siblings. As playful as it may look, a sense of mischievousness and danger, the kind of danger we all put ourselves in one point or another in life, takes over.

As I prepare to move onwards, I still have time to visit a small mound surrounded by water and connected to the island by a fragile log bridge. Three brown pelicans took possession of the area and one seems to be quite impatient with my presence. Perhaps this is a family of pelicans, the father eager to protect mother and child. 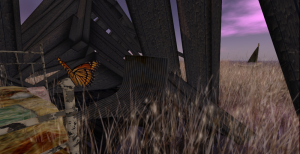 I then head north, to the next island. As I arrive, I am greeted by a pair of shoebill storks. You may not know these birds, but I can tell you that they do look awkward! It is said that we all act oddly as we grow older, but that doesn’t stop me from trying to engage in a conversation with them. Perhaps they can tell me a bit more about this place. However, they are totally uninterested and point the way toward a ruined windmill, crumbling on the ground.

I notice there’s a bed inside. Above it, a junk-chime tinkles softly. It’s made of a can of tomato, a few keys, a wrench, the cable of a knife, a porcelain cup and a spoon, just enough elements to write a whole story.

I lie down. A butterfly is flapping its wings gently at the foot of the bed. Through the wood planks, I notice a swing, a vague recollection perhaps, hanging from a meteor. The swing is for one or for two, and I cannot help thinking that our journey to discover stories untold is approaching its end.

Funny thing, these meteors, they come crumbling down, destroying, devastating everything, and I dare say everyone who has the misfortune to stand in their way. However, they also have the enthralling power of making you look up, toward the sky, embracing change, taking on a new path, a new future. I hop on an old bath tub and sail away east, past a few geese flying. The last island is bordered by snow. The water is still there, omnipresent throughout our voyage, yet here it’s colder. The rocks are grayer as are the flowers. The water lilies still bear a touch of yellow, stubbornly, while white lilies threaten to invade. An old wooden bench resists the flow of time. I sit down. It’s only for one. From my seat, I watch the flamingos, immobile, in their elegant beauty. A lonely sparrow sings merrily. Oh, wait, there’s another nearby. That’s good.

By the edge of the island, I see a rowboat, half sunk in the water. I imagine an old retired sailor preparing the bait for his afternoon of fishing and telling, perhaps his grandchildren, stories from back when he was a young man.

Curiously enough, I notice now, there is no meteors shower here, only yellow fireflies. Well, they are particles, but in our stories, they’ll be fireflies!

It’s time to leave. I grab a ride on a bird. I decide to fly away with the geese. They are going back to the island in the middle of the sim where we landed as we arrived. Its waterfall draws me to explore the world beyond the surface. Something tells me that there is much more under this placid water mirror. Well, I must confess. I know there is!

This sim is impressive and remarkably symbolic. Its aesthetic design is empowered by colors, shapes, and details. The right hint of sound, here and there, makes the beauty of silence stand out.

I close my eyes and listen. Yes, I do hear stories of “memories, dreams, thoughts and passion”. As Joanna Corith states, Annwan Willows is a “temporary vision”. As temporary as Life is, I dare add.

Finally, I’m back where I started. I sit one last time by my confidant, the lovely squirrel. He asks me about what I have seen. I tell him about the new stories I have in mind, so many stories!

Oh, and there’s a moon, stars, and a Little Prince as well, somewhere in a dream. But that’s for you to find out, because… there’s a story waiting to happen at Annwn Willows.

Disclaimer: Virtual Writers Inc. and I are in no way affiliated with any shop located in the sims featured in this column nor do we intend to promote them.
Posted by Lizzie Gudkov