Take a Walk on the Scary Side 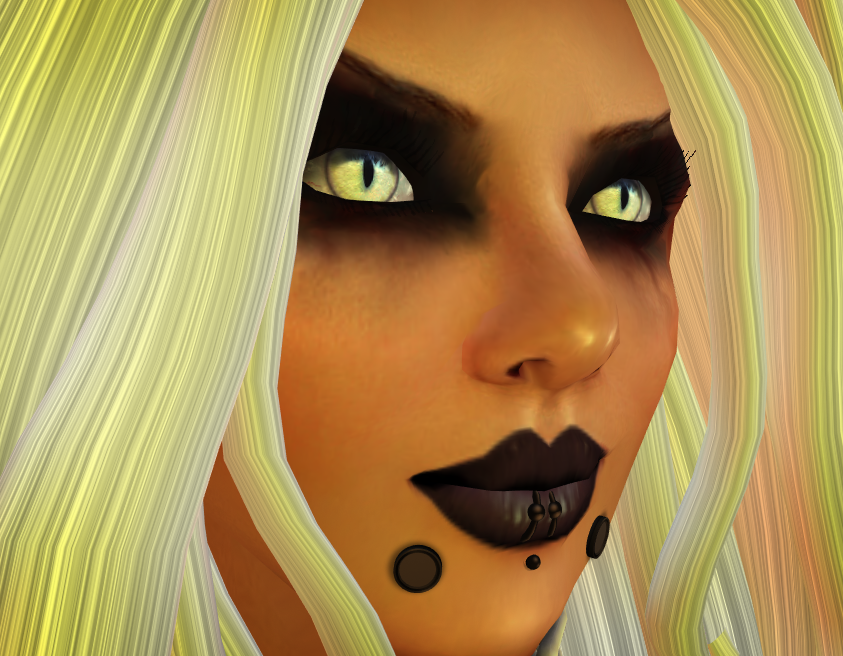 Virtual worlds, in this case Second Life, are an extremely interesting resource for writers. The possibility of being immersed in a variety of environments offers an array of ideas and stimuli that are an important contribution to story writing.

This article aims at showing you how easy it is to draw inspiration from different locations in Second Life. I’ll take you with me through the whole process.

1. Choose a sim from the destination guide or follow one of Camie’s suggestions. If you already have a landmark to a location you’d like to draw inspiration from, double-click the landmark in your inventory to be teleported to the sim.

2. Upon arrival, take a few steps away from the landing point. More people might teleport in and they would land on top of your head!

3. Wait a few seconds for things to rez properly. Depending on what exists at that location and the characteristics of your own computer, the location will rez slower or faster. So, it is worth waiting a little bit.

4. After things have rezzed, start exploring. I usually take a stroll around the sim without really thinking too much about my writing. I just try to enjoy it. Then I take a second walk focusing on details that caught my eye. As I walk along, I take a few snapshots (Ctrl+Shift+S > Save As… > choose location in your computer > rename if needed > Save) that I use when I’m off-world.

5. Sometimes, when you arrive at a location in Second Life, you may feel overwhelmed by so many interesting details and you’ll feel tempted to use as many as possible. However, that can be very distracting once you start writing. Some sims are so rich that it is as important to be able to gather information as it is to be able to discard it. So being selective is imperative, otherwise you’ll end up with a pile of unusable ideas simply because they don’t fit. Start by focusing on three or four aspects you think will be of value to your story regarding the setting, the character(s) and/or the plot.

6. Below you’ll find an example of how virtual-reality can assist you in writing a story.

Camie’s challenge was to visit a location in Second Life related to Halloween, and to write 300-600 words. I decide to visit Screaming Woods, one of the sims suggested in the blog.

I have no characters and I have no plot.

As I start walking through the sim, I notice a bay filled with floating, decaying bodies. What impresses me the most are their hands reaching out of the water, as if trying to grasp the last straw of life. 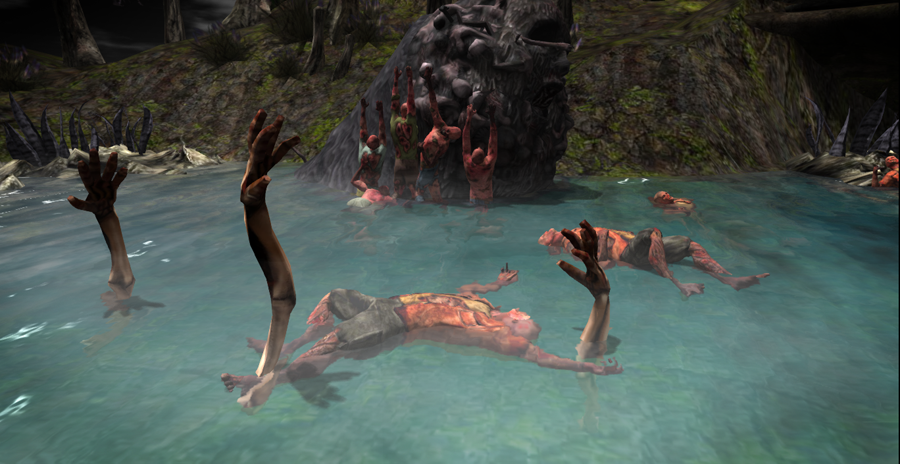 Another aspect that catches my attention is the few men trying to hold onto a rock; some of them are still wearing ragged pieces of clothing. I decide I have my characters, at least a few of them. I don’t know if, along the path, I will find any more.

I have the beginning of my plot; a group of men arrive at this island, after something terrible happened to them. You’ll see that farther up, there is a destroyed ship; it looks like it survived a storm. 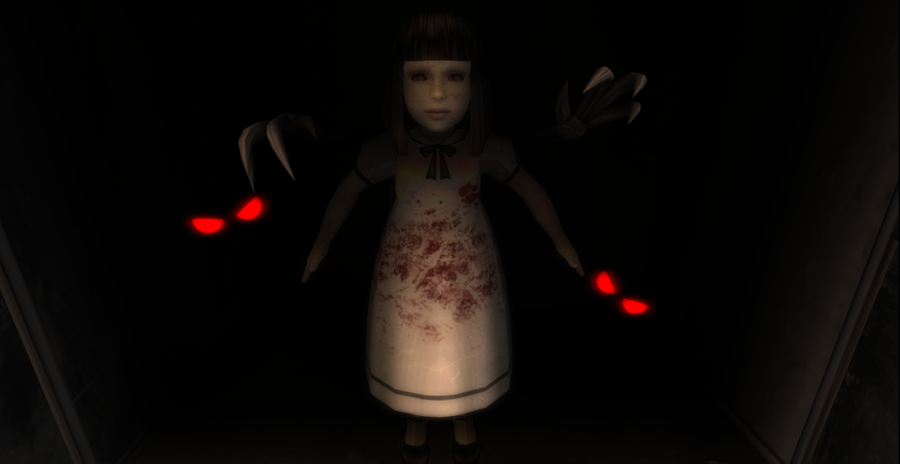 When I turn around, I see a house. Inside, there’s a closet with a child in it; she’s surrounded by spooky red eyes. I cannot see who or what is behind her. Her doll-like figure sharply contrasts with her white dress covered in blood. I can also see a pair of claws either threatening to grab her or keeping her safe. I add her to my list of characters. 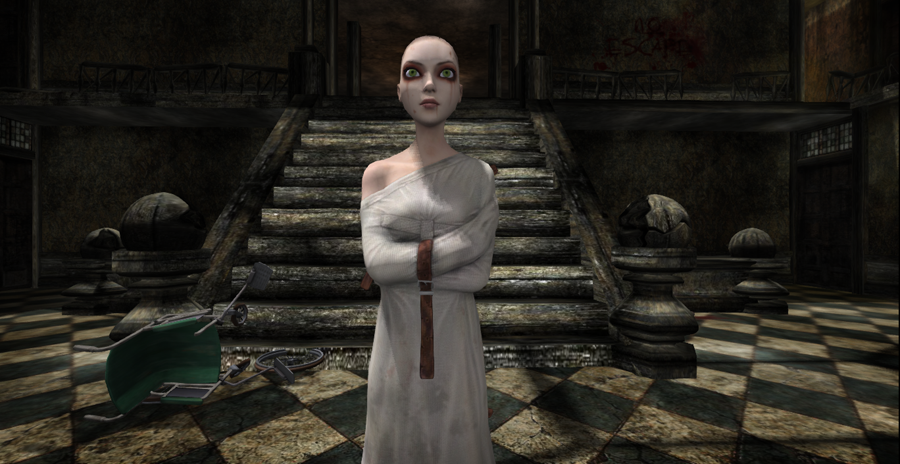 I continue to walk up the hill towards the house at the top. The area around it is dark and cramped. As I open the door, the first thing I see is a young girl. She’s in a straitjacket, her hair is shaved and she looks scared. I immediately decide to make her a character in my story.

I venture inside, walking past her, and end up in the room that looks like an operating room or rather the decaying remains of one. Amidst stretchers and other objects, there’s a cage. It’s empty, locked, and padded on the inside. What caught my attention was a candle hanging from the ceiling of that cage; it’s lit. Now why would a candle be burning inside a padded cage? 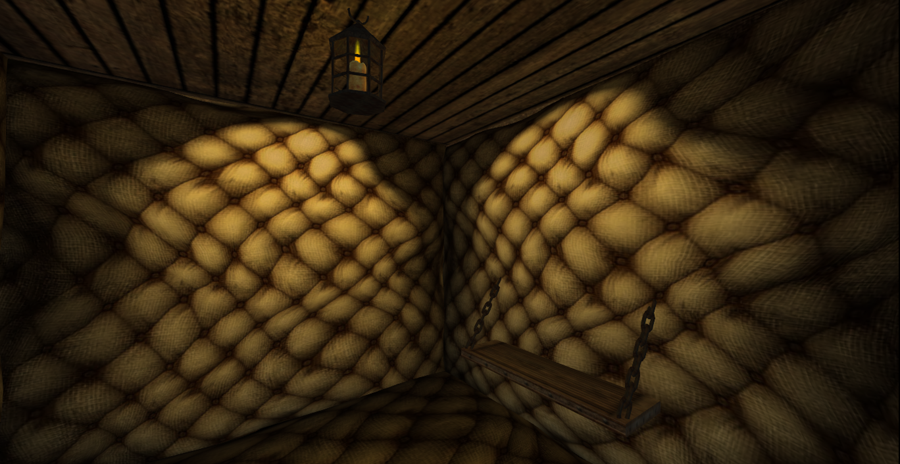 The beginning of a story is paved with a million questions. Answering those questions becomes the process of writing.

Allow me to go back for a moment. What happened to the men we saw when we arrived at the sim? Who are they? Where did they come from? What is this island they arrived at? Why is the island empty? Why is there an abandoned psychiatric hospital at the top of the hill? And why is a child there? Is she by herself? How does she survive? Why was she left behind? What will happen to the men when they arrive at the hospital? And so on.

As you can see, with only a few elements there are plenty of questions to kick-start your story. It may even happen that some of the questions become irrelevant and you end up discarding them. No problem. They probably triggered more questions that became an important stepping-stone for your plot.

Now, let’s get to work. Equipped with images, sounds, questions, ideas and, above all, words, I am ready to write. 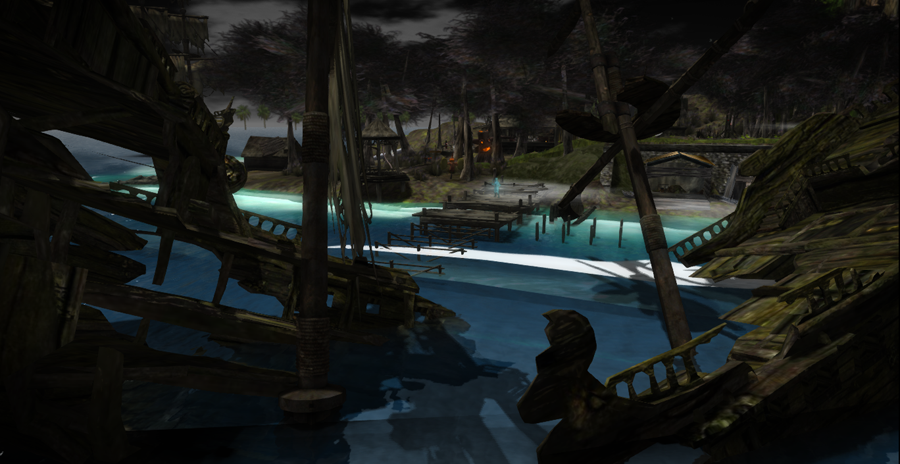 Black clouds announced a sealed destiny while a ship got mercilessly dismantled by vicious waves.

The small bay was filled with deformed bodies of sailors, rotten and floating aimlessly, struggling to reach the shore, their hands reaching out from under the water. The stench was indescribably horrendous.

Although their bodies were already decaying, they still had hope, that unbroken hope of a dying man scrambling for the last chance to survive.

The few who survived the storm decided to walk inland in a tight group, desperately looking for signs of life, but knowing that this island was eating them alive.

There were a few abandoned huts displayed in a circle, but no sign of life was to be seen, no people, no animals, and no food. However, strangely enough, the fire was burning in the middle of these huts.

The small group struggled up the hill, following a narrow path, stumbling on mossy stones and branches of old trees. They weren’t quite sure if it was the result of hunger and thirst, but those branches seemed to be alive, grabbing them by the ankles, slowing their progress.

When they reached the top of the hill, they saw the silhouette of an old building. It looked abandoned and solemnly sad. The men hesitated. Should they go in? Hunger provided them with that last straw of courage that pushed them forward.

As the door slowly opened, they saw a young girl. The island wasn’t abandoned after all, they thought. Their initial sense of exhilaration rapidly gave place to an ominous feeling of hopelessness though. The girl was in a straitjacket; her head had been shaved bald. Her eyes were filled with fear, an unimaginable fear.

On the balcony above, someone had tried to write ESCAPE on the wall. Written in a vibrant red, the word was smudged at the end.

As the men entered the hall, hoping for some kind of reaction, she kept still, wrapped in that growingly constrictive straitjacket.

Suddenly, they heard scratching noises coming from a room in the back. They decided to investigate, especially because they were hungry, very hungry, and hunger pushes men to make foolish and hasty decisions.

The room was an old operating room. Rusted surgical tools, a gurney and a few chairs lingered forgotten on the floor.

In a corner, there was a silent cage. It was locked and empty. Much to the sailors’ surprise, inside the cage, a lit candle was hanging from the ceiling. One of the men muttered “perhaps there is something in there; we just can’t see it”.

The noises grew in intensity and were now followed by anguished shrieks. The men couldn’t figure out where the shrieks came from, until they saw the doors of a closet opening slowly. A chill crept down their backs.

A small child, wearing a white dress, was standing inside the closet. Two pairs of red eyes stood behind her and two clawed hands reached over her shoulders. She looked like she wanted to escape, to run away from an unwilling imprisonment.

Despite the pain they were in, their skin peeling off as if burnt, some of the sailors felt compelled to help. They reached towards her to get her out of the closet but it was like she was stuck inside. The more the men pulled her out, the more her feet sunk in the floor. The small child shrieked in anguish.

The scratching turned into growling, a growling that became louder and louder, a warning no one wanted to pay attention to, a threat as strong and palpable as the inexplicable storm that hit their ship earlier.

Suddenly, the small child’s shrieks turned into a soft, plaintive humming. Before anyone could do anything, all the men were turned into ashes.

The young girl in the straitjacket left her place by the entrance, walked in the old operating room and into the cage, closing its gate behind her.

Over the next few days, the wooden planks of the ship disappeared under the clear blue water. The fire in the empty village died down. The path up the hill towards the abandoned psychiatric hospital was covered in brittle, orangey leaves. And the dark black clouds parted, giving way to the most beautiful blue sky.

A year later, another ship would be sunk, caring lost and frightened sailors whose skin would be burnt to the flesh. They too would set foot on the island and become hopeful as they see the fire amongst the empty huts. They too would walk up the path, all the way to the psychiatric hospital, to stand before a lost young girl in a tight straitjacket.

And no one would ever escape their destiny. The island would be fed once more, forever keeping those two children as doomed prisoners.

This story is only an example of what can be done! I have intentionally kept it simple. You can use more elements than the ones I have chosen to use or you can even use less.

It goes without saying that the elements you decide to include in your story are merely a source of inspiration. As you’ll see, if you visit the sim, the closet with the spooky small child is not in the hospital! So, you can, and should, use anything you collect according to what you need and what your story dictates. 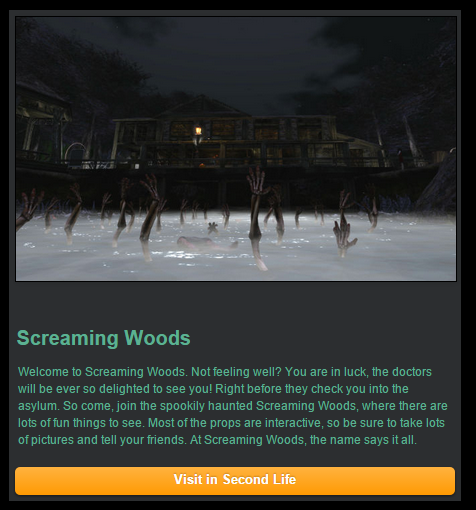 The ideas you draw from different locations in Second Life will provide your story with the depth it needs to grow into a coherent, interesting and often daring story.

Above all, have fun!