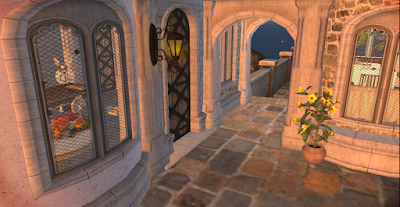 The waves crashed against the rocks and the seagulls screeched loud, signaling there was food around. But the toy maker hardly noticed the sea anymore.

“The house is not ready, not ready.”

He paced left and right behind the counter. He repositioned the dolls on the shelves, rearranging their posture. One of them slouched against the shoulder of the other and he didn't notice the mischievous act of rebellion.

“The cat’s outside. He wants to come in, come in, but I have to work. And the dresser is not ready. The house, the house. Focus on the house.”

He was just the toy maker, that’s what everyone called him, a middle-aged man who mostly kept to himself. No one knew his name in the small village. Well, everyone had forgotten it. However, everyone loved him. He always had a word of comfort to the sad, a small toy for the restless child, a bag full of toys for the village’s Christmas party. Although a bit of a peculiar loner, he was as much part of the village as anyone else.

He rushed to the back and opened the door.

“The cat, the cat,” exclaimed the toy maker, trying to prevent the cat from going inside but he quickly gave up on contradicting the feline’s perseverance.

And then, the toy maker held the wooden duck carefully, a sudden wave of calmness taking over him. He painted layer after layer, slowly.

“Just one more,” he finally whispered.

He would always lose track of time when he was making a toy. He would completely immerse himself in his thoughts about shapes and colors.

But the toy maker had an emptiness in his heart, a sadness he never talked about with the other villagers. He had a wife and she had gone missing years ago.

Claire was her name. Her captivating blue eyes had revisited his memory many times. With her by his side, everything made sense. She got pregnant and then tragedy struck. They struggled together. But he was helpless and she sank more and more.

When she disappeared, he got lost inside of himself. Nothing mattered anymore and he hid in his toys. Whenever he saw a mother or a father hold a child’s hand, struggling to contain the kid’s enthusiasm picking up a toy, he saw the smile of his wife, the woman he would have had children with. He missed her terribly. And he had made an effort to forget her name too.

When he was done painting the duck, he went back inside.

The wealthy Mr. Huntington from across the plaza, grandfather to a bright little girl, commissioned him to build a doll house for his granddaughter and the toy maker was dreadfully late. He found himself being somehow stuck. The house was ready but all the interior details were missing. He usually worked fast and this was totally atypical.

His mind wandered back into the past. A few days earlier, not paying attention, he had taken a different turn when returning home and he had seen the poster on the wall. It was still there after all those years, her face still smiling a soft smile. What an unusual trade, and how beautiful too, she had said about his job and he was in love with her straight away. 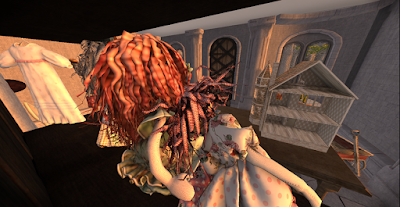 The toy maker leaned forward, his hands on the counter, and tilted his head to the left, like his Claire used to do when she was pondering about something.

It was exactly then that Mr. Huntington’s maid peered through the front door.

He was to drop by the house. Mrs. Huntington would like to talk to him.

“Oh, dear. Oh, dear. I’m not presentable,” he mumbled, a wave of nervousness taking over him again. He noticed that splatters of paint covered his sleeves and fingers. “Change, change your clothes.”

And he rushed upstairs, tripping over cardboard boxes already packed with toys to be shipped to their destinies. Christmas was still a few months away but he always made sure everyone had their deliveries early.

He changed into his best clothes, a three-piece suit he had bought a long time ago for the opening of the Cat and Mouse, the local pub.

He hated social gatherings of any type. When he was invited, he fought back, excuses shooting out of his mouth randomly. However, Mr. M, his next door neighbor insisted, vehemently denying every justification the toy maker managed to produce.

A frenzied search for the twin shoe set the whole upper floor in disarray. A pile of boxes tumbled down, triggering the curiosity of the yellow tabby, who rushed to inspect their contents. 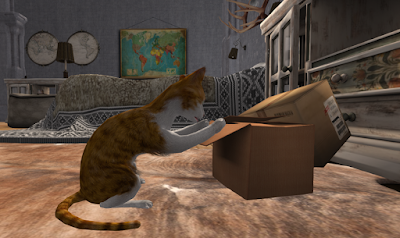 “Kitty, quickly,” he said. But the cat had no intention of getting out of his way. “My shoe, my shoe. Oh, dear.”

He scrutinized every corner; he even looked inside the mail bag filled with tons of postcards and letters sent to him by children from all over the world.

He never threw any of these cards away. He cherished them. They were spread all over his private quarters. Somehow, they comforted his soul and he always found it endearing when kids addressed the mail to Mr. Toy Maker.

In his haste, he nearly knocked down the empty mug with the mark of her lipstick which sat on the engraved side table since she had disappeared.

In cold nights, he would enjoy the warmth emanating from the wood stove, as he smoked a pipe. He felt that Claire kept him company and he never took the mug away.

“Ah! There you are.” The sneaky shoe was hiding under the sink.

Finely dressed and with both shoes on, the toy maker rushed downstairs and hurried across the plaza, scattering about a flock of doves while trying to button up his jacket. When he arrived at the Huntington’s he took a deep breath and knocked at the door.

“Do come in.” It was Mrs. Huntington. Well, that was unusual. She personally welcomed him at the door and gently pulled him inside.

“I have something to tell you, Mr. Randall. Please, do sit down.”

Hearing his name out loud after so many years startled the toy maker. How did she know? No one remembered his name anymore.

And that was when his life changed.

“I know you’re quite busy preparing the dollhouse for my youngest.” She paused and smiled.

His heart was pounding. 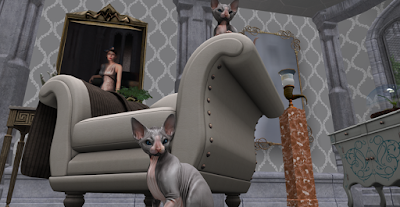 “So, I’ll go straight to the point. You are such a gentle man and you always have a kind word and a small token to offer. So, the village folks decided that it was time for us to do something for you instead and I was put in charge of that. I must admit, I had absolutely no idea of what to do until Mr. M made a suggestion.” She sat closer to the edge of the sofa. Her sphynx cats stared at her peacefully. “He told me about your deepest wish.”

The toy maker mimicked his host and sat closer. He had no idea what his neighbor might have told Mrs. Huntington.

“I hired someone to review everything, every bit of documentation available.”

He was even more lost.

“I don’t know how to tell you this.” Her voice started failing her a bit and her eyes became teary.

“Oh… There, there, Mrs. Huntington.” He tapped on her knee softly. The toy maker didn't know what to do.

“We found Claire. She lives a few miles away from here.” Mrs. Huntington leaned forward and held the toy maker’s hands. “We have found your wife, Mr. Randall.”

The toy maker’s mind was racing. He stood up abruptly and started pacing back and forth. The sphynx cats followed his movements.

“Yes. When she went missing from your home, she was found wandering in a town many miles from here, naked, and she was taken to the psychiatric hospital where she struggled so hard. She couldn't remember anything. She couldn't remember her name or where she lived. She became extremely violent and they transferred her up North to a mental institution for severe cases. After an experimental treatment went bad, she survived years of a deep coma. When she was finally released, just a few months ago, she was adamant. She wanted to live close to the sea.” Mrs. Huntington smiled softly. “No one understood why and no one cared. She was not their responsibility anymore. They did have other concerns like investigating what had gone wrong back then, fearful of legal problems, I’m sure. But my father has asked his lawyers to take a look into that as well.”

The toy maker continued to pace back and forth.

“She lives in the neighboring village. Her small cottage has a remarkable name, New Beginnings.” Mrs. Huntington smiled again. “Sit down next to me, please.”

He did. The tone of her voice soothed his anxiety.

“How do you feel about this?”

He shook his head in disbelief. Then, he turned to her and looked her in the eyes, something he never did with anyone, except Claire.

He just couldn't believe it. He stood up abruptly once more. 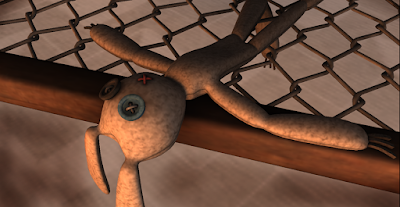 “Throughout the years, she let go of everything, including herself... But she never let go of you. She refused to part from a toy.”

The toy maker stood behind the sofa, motionless.

“A rabbit, stuffed? Two mismatched buttons for eyes and a hastily sown cross for a mouth?”

“I made it in a hurry when we first met. She loves animals.”

“Yes, she does. She has chickens; she has dogs, a cat and a rabbit, that I can think of!”

The toy maker sat next to Mrs. Huntington and, after a pause, gave her a tight hug. She laughed. 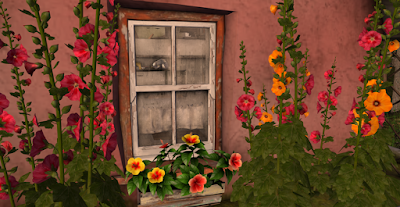 When the toy maker visited his wife Claire that afternoon, he wasn't nervous. He didn't repeat his words and he didn't hurry to button up his jacket. He didn't do anything abruptly.

He felt her breathtaking blue eyes and her soft smile on him again, and he was at home.

Mr. M playfully complained that he had lost his good neighbor. He loved sharing his adventures and the toy maker loved listening to them. So, they decided on a weekly Friday evening get-together, just the two friends, for a glass of whiskey, a bit of smoking and travel stories.

He carefully thought about each family and crafted a toy, a token of his gratitude and friendship.

And then there was the dollhouse.

He worked hard on it. He created every little object inside of it, from the rugs and paintings to the cutlery on the dinning-room table. On the tiny coffee table in the living-room, he placed a tiny card with the words “Thank You”.

Note: This story was inspired by Boudicca Amat’s Hestium.

When I arrived at the recently renewed location, I had no idea who the new residents were. I was curious and excited to meet them. However, I wasn't sure I’d have a story to tell.

Boudicca’s creation offered me so many wonderful details that my main problem was to avoid cramming too much information into my story. And what an awesome problem that was!

If you’re a writer and need a new character, drop by Hestium. You’ll be surprised to see all the characters who have taken up residence there recently, their lives, their dreams, their pasts and their secrets. They are right there, before your eyes, within the walls of their homes and in the objects they own. Perhaps you can write their futures! 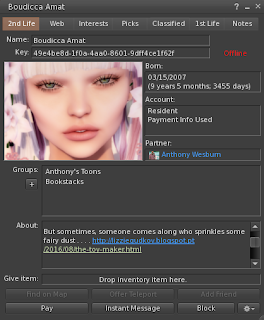 Email ThisBlogThis!Share to TwitterShare to FacebookShare to Pinterest
Tags Short-Story