It Takes a Village - Chapter 12 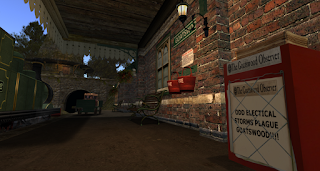 The front page of the local newspaper clarified the dramatic sequence of events, even though it was only the clarification the village decided to provide, just in case any outsider happened to read the article.

Intentionally, there was no mention of Japanese boxes or keys, and most certainly not of any code, a word that always triggered a heightened level of curiosity.

“Our usually quiet and beloved village was taken by storm. A large number of train commuters were forced to wait here for hours when bad weather damaged the line. Amongst these passengers was Isabella Duncan, a woman sought by the police for suspicion of murdering her husband, who was said to have had multiple affairs during his frequent business trips. With this woman traveled three accomplices, a young couple and another man, all notorious for gambling in high-profile venues with embezzled money. Motivated by a growing amount of debts, the gang planned to steal the village’s treasure, our church’s gold chalice. The piece was fortunately hidden at the vicar’s private residence. In a darker and unexpected turn of events, Isabella Duncan, possessed by an inexplicable wrath, hanged her own innocent little daughter. All four members of this dangerous gang were kept in the Inn by our heroic innkeeper, our valiant stationmaster, Lord Crewe’s fearless cook and the intrepid matriarch of the local gypsy community till the arrival of the police, who had a hard time taking the outlaws into custody; they screamed threats and incomprehensible accusations about a wooden box and some lists. All four will be evaluated psychologically before going to court.

Finally, celebratory ceremonies will be held on a date to be announced. All interested participants are encouraged to talk to Mrs. T, this weekend at the Mill between 3pm and 5pm, or to the vicar, Sunday after mass.”

Ernest, Augustus, Mirela, Stefan and Mrs. Thomson sat in the stationmaster’s kitchen with a grin on their faces.

“The codes, the key and here’s the box,” said Ernest, placing the objects on the table. “Now, let’s see” he added, rolling up his sleeves.

It took all five of them the rest of the afternoon to figure out how to open the Japanese Himitsu-Bako.

The codes, in fact a long list of moves and their sequence, had several mistakes and to make things worse, the young woman had lost hers, admitting she knew it by heart but flatly refusing to dictate it from memory.

These codes had been given to Lord Crewe along with the box. He always carried them in his wallet. He was a softhearted man and having the codes with him made him feel closer to his son.

That night while Fred kept the noble man talking, Millie an experienced pickpocket stole the codes.

Later, all agreed that it was too dangerous to keep the list in one piece and in the hands of only one person, so they decided to divide it between the two and Isabella, considering that Ron already had the key. This way, each one of them would have one piece of the puzzle.

When Ernest finally inserted the key in a much hidden keyhole, they heard a soft click and a false bottom slid open, revealing what everyone had so longed to admire, resting on a bed of black velvet, an astonishing assortment of emeralds, rubies, diamonds, sapphires and opals of incalculable value.

“When the time comes, Stefan, you will have these gemstones,” said Augustus. “They belong to you.”

“When the time comes, I’ll make good use of them.”

The Japanese box was closed again, the key and the code given to Stefan and the oath renewed.

The whole village, the four guardians and Stefan, the future Lord of the Manor, went back to their every day affairs, some during daytime and others at night, some praising the living, others evoking the dead.

The location of the box will, understandably, not be disclosed in case the cherished reader feels tempted to try to find it, but be assured, it’s not in the Mill!

~The End~
Posted by Lizzie Gudkov