A Story Waiting to Happen

This post is part of a series of monthly articles for the Virtual Writers Inc. website about sims in Second Life that could be inspiring for writers. My goal is to trigger ideas for new stories, new characters and new settings. Enjoy!


Note: One of the characteristics of Second Life is the fact that it's constantly and rapidly changing. Sims come and go; others look quite different, as time goes by. Do take that into consideration when using the links provided. 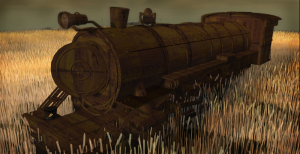 As news of a Second Life 2.0 of sorts emerge from all corners of the blogosphere, I cannot help but feel the need to go back to The Far Away, AM Radio’s creation now preserved by Ziki Questi, a blogger, photographer and artist herself.

Made mostly of what some call “the old technology” (aka prims), The Far Away has been an all-time favorite of both residents and bloggers from the entire spectrum of areas in Second Life (SL), writers included. I, as many other SL residents, have returned to it over the years many times.

Back in 2009, I took part in an SL event called The Poetry Quest. The idea was to write a poem based on a place indicated by the organization. AM Radio’s creation was one of them. Inspired by this extraordinary piece, I wrote Solitude.

Despite my familiarity with this installation, I felt it would be important to talk to Ziki. From her I learned that The Far Away was AM Radio’s first creation in SL, the first among many that are now all gone. It exists since 2006 and at this precise location since 2007. Not being considered a “museum piece” at all but rather something alive, it has seen a few small changes here and there. However, the core of this piece is very much the same and it does look remarkably current.

I asked Ziki why she felt compelled to take a step forward when she realized The Far Away was about to be dismantled. She replied that for her this was “a seminal build, a fantastic work of immersive art, and (…) [that she] didn’t want to see it disappear”.

As I prepare to take you on this journey, I spent quite some time on location and I too noticed what Ziki told me during our conversation, that “there are almost always people at The Far Away… an interesting combination of old-timers (including many who have been away from SL — it’s one of the few places they loved that’s still around) and new people”.

So, let’s kick-start our imagination!

Up to now, we have visited full sims, locations with enough elements to trigger a hundred stories. This time, I will attempt to draw your attention to one single plot. The scarcity of elements present is both challenging and inspiring.

The first impression is of solitude amongst the endless field of golden wheat. Yet quickly we realize that so much might happen here.

The abandoned rusty engine in some way evokes the idea of traveling and our mind wanders off into the future. Perhaps this is a reminiscence of a far away past, now that humans have moved away, after hundreds of years of explorations and experimentations throughout space, a recollection, an anchor even.

At the back of the locomotive, I notice that there’s a sketch of a deserted landscape with a bare tree. A flock of birds flies by. There’s a pencil beside this sketch. I feel like picking it up. I’d however only add words instead of drawing something. We are writers after all, aren’t we? So, let’s continue our voyage seeking for words.

The smoke box door at the front of the engine is half open and a dragonfly is ready to follow us. I wonder why it hides inside. There’s another dragonfly though. It buzzes about merrily; it suggests to me a totally mischievous children’s story, where the kids of a local farmer play hide and seek, sheltered from the world, trying to dream up magic plans of never ending adventures.

Embraced by a few twigs and decorated with two feathers, a top hat rests peacefully. It somehow seems out of place. I nevertheless make an effort to integrate it in this path of ideas for stories. 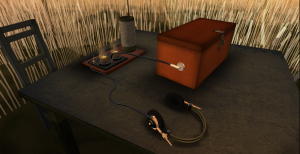 A symbol of affluence, the black top hat became quite fashionable in the nineteenth century, a century of important developments such as the growth of railways, the means of communication and science.

On one of the sides, the power lines evoke long distance, as the name of this location does as well. For some reason, I feel that there’s a story of spies in The Far Away. Secret communications, coded messages sent from abroad, all end up at a table where a rudimentary radio and headphones are waiting to be used. 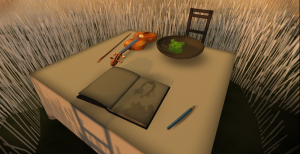 The secrecy, I imagine, involves a lady violinist whose drafted black and white charcoal portrayal has just been finished. This drawing was perhaps made by a mysterious, secret lover who dropped by her place unannounced. When we click the bowl of green grapes, we are offered a glimpse at this character or any other you might choose.

Our stories waiting to happen include a microscope, the one sitting at the top of the cupboard, which challenges the visitor to search for almost invisible details. As I walk towards the barbed wire fence, I notice a ragged cloth waving in the wind, caught and struggling. However, I am followed by that dragonfly. It flutters about. It promises so much in a whispered hint, and unexpectedly the fence becomes much more than a line, much more than a separation. It becomes a promise of freedom. 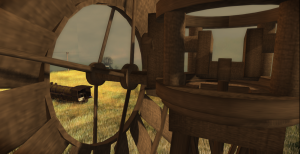 I look up and see the windmill. The windmill spins fast, almost dizzyingly fast. Suddenly, the ideas move away from the ground. And we fly above the golden field of wheat, its symbolism opens up an array of possibilities for stories, some charged with spiritual content, others of promised wealth and abundance.

Finally, I go back to the locomotive, the heart of a train. It lingers in the center of this location, ready and waiting. If you sit at the top of it, your avatar will be placed in a larger-than-life pose, arms stretched outwards, shards of light emanating from behind, definitely an image evoking the power to overcome difficulties and surpass all hurdles.

Before I wrap up, there are a number of clickable items where you can get a lot of interesting information and inspiration from. Some are not as visible as others. Hint, hint!

Whether you are hoping to write a story reminiscing about the past, a story about children, about spies, revolutions in technology and science, or simply a love story, I invite you to drop by and experience this intriguing and captivating location, because… there’s a story waiting to happen at The Far Away!

Disclaimer: Virtual Writers Inc. and I are in no way affiliated with any shop located in the sims featured in this column nor do we intend to promote them.
Posted by Lizzie Gudkov